How Many Blocks Long?

Do you have a list of "won't work" activities? Activities that seem to be okay and you've tried but the kids just don't seem interested? I do. But the group I have this year is out to break all those ideas. A while back they proved me wrong by outlining letters. And this week they proved me wrong again.

When I told them they could see how many blocks long/tall they were, I think they almost cheered. Maybe it helped that we had a place to record our results. (My oil drip pan came in handy again.) 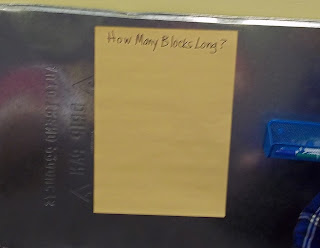 First one friend would measure another.

Then the friends would trade off. 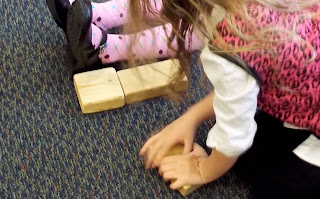 Don't forget to record those results. 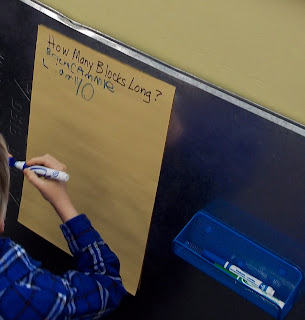 I think they almost cheered as they did this activity.

We got some literacy in, too. I explained that she was 12 blocks tall/long, not 12 inches. But isn't that writing and invented spelling impressive?

I'm dusting off those "won't work" activities - especially the ones with math or blocks connections - and trying them out again.

What activities have you found that "won't work" with your groups of kids?
Posted by Scott at 5:17 PM