From time to time I'll try an activity that I'm not totally confident in. Oh, it's age-appropriate and hands-on. It will connect to the learning emphasis and will allow the kids to explore and adapt. But I'm confident that the kids will enjoy it as much as they do other things. This week was one of those activities.

We were going to look for letters to spell the word OBEY. (We were talking about families and obeying parents.) The suggestion was to find letters in shredded paper. I thought sand would be more interesting but decided to try the paper. We haven't done anything like that this year. (I also liked that I could recycle the paper in my shredder for a new, more noble learning purpose.)

I put magnet letters in the shredded paper and placed my large magnet board beside it, with cards that spelled the word. (Note the sign. I'm trying to follow preschool-daze's great example.) 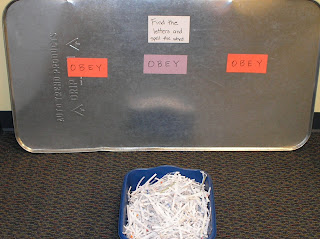 A decided to try the activity and played with the paper for a while. Later she came back to do it again and H joined her. 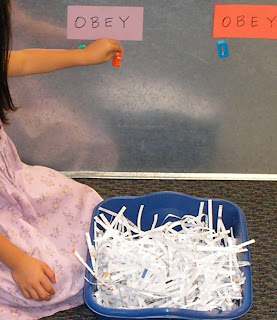 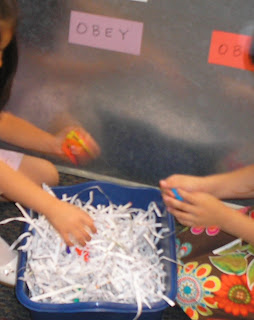 Eventually J joined in, too, and that's when the activity took off. They enjoyed finding the letters and spelling the word three times. Then 2 friends would go do something else while the third one hid the letters in the paper again. When done, the call went out and the two came back to find the letters again. 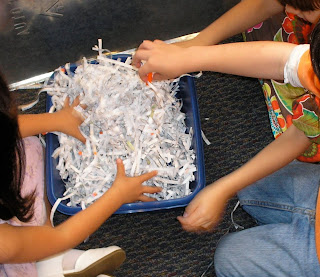 They did this several times, experimenting with how to hide the letters. I was also impressed with how they kept the paper cleaned up...putting the shreds back in the dishpan as they found the letters.

I'm always happy when an activity is enjoyed more than I even thought.

This also reminded me of a particular trait of this class - they love anything that is new. I don't think the activity would have been done the same way if I had used sand. We've used sand several times in recent weeks; we've not used shredded paper. That newness created a little addition interest in this group.

I like to experiment and this group is continuing to encourage me to do it. They like it too!
Posted by Scott at 7:51 PM